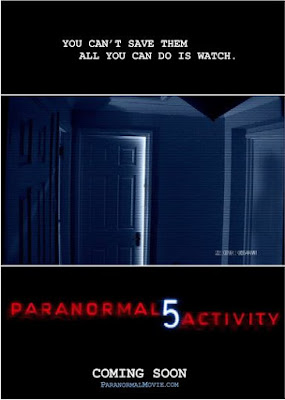 The first official trailer for "Paranormal Activity 5: The Ghost Dimension" has been released. The film is the final chapter in this runaway hit saga that follows one family's haunting delimma, (with one break away story). 5 is directed by Gregory Plotkin and stars Nathan Brewer, Jay Hierson, Ivy George, Chris J. Murray, Brit Shaw. "PA 5: The Ghost Dimension" is due out on October 23rd, 2015.

Paranormal Activity: The Ghost Dimension centers on the Fleeges — father Ryan (Chris J. Murray), mother Emily (Brit Shaw) and their young daughter Leila (Ivy George) — who move into a house and discover a video camera and a box of tapes in the garage. When they look through the camera’s lens, they begin to see the paranormal activity happening around them – including the re-emergence of young Kristi and Katie. The video camera footage will be presented in 3D in theaters.