My Review Of "Kruel" 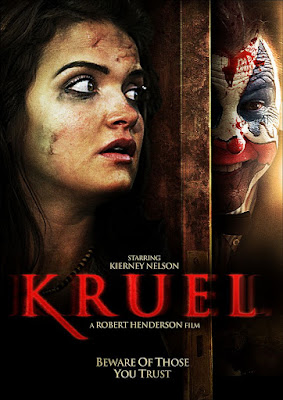 Robert Henderson's "Kruel" is a psychological thriller with hints of horror in one intensely drawn nightmare. The film stars  Kierney Nelson, J.T. Chinn, Dakota Morrissiey, Adam Vernier, Elizabeth Brewster, Ansley Gordon, Cooper Henderson, Keegan Henderson and Tom Riska. It is a horror film without any horror. Yeah I know that that statement is argumentative considering the subject matter, but I didn't feel that "Kruel" had enough horror genre elements to be classified as a real horror movie.

Now the story that Henderson has devised is captivating and deals with some very horrific realities of society. There is an antagonist that is creepy and nightmarish as all get out. The acting and direction that Robert Henderson takes with this film is stellar on almost all levels of story telling. It is dark, emotional, and often insanely intense. However the story stays in very dramatic, suspense thriller areas where character development and scene building reach a fevered pitch but never deliver any real heat.

The special effects aren't really present in this "horror" film through 98% of the movie. It is all melodrama, high emotion dialog, and really cool scene transitions that combine with some very retro horror designed sounds. Only there is no real horror present. Everything stays suggestive or just not approached. Which sucks because had Henderson thrown in some noticeable giallo styled gore or graphic violence, then "Kruel" could have been a breakaway hit. Unfortunately everything stays pretty PG-13. There is one singe boob shot and one moment of gushing blood, but that comes "too little too late" for me personally.

Overall I have to say that "Kruel" is going to disappoint almost all horror fans going into this film expecting anything other than a really emotional, dramatic story. As I have said-there is no real horror here. The subject matter is horrific, the drama is intense and the story is well written. It is all just a bit "Lifetime Movie Network Adjacent". I got the same experience while watching this film that I have gotten mistakenly watching a few of the church produced "horror films". Still the acting and story are pretty nice. Just wish that the film was marketed as psychological thriller or dramatic thriller, instead of Horror thriller.