My Review Of "Star Leaf" 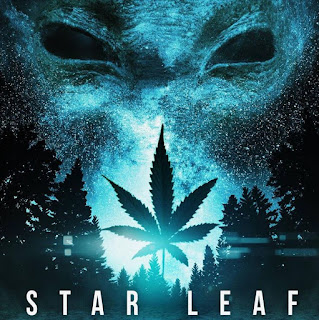 The trippy sci-fi thriller "Star Leaf" is a journey into the far out. The film is directed by Richard Cranor and stars Julian Gavilanes, Tyler Trerise, Shelby Truax, Russell Hodgkinson, and Richard Cranor. The story is one that is part road trip-three friends take a trip surfing in the great North West Coast. Along the way they decide to search for the fabled "star leaf". The leaf is a strain of pot supposedly brought to earth by ET, or the gods. All is debatable when you are high!

For me personally, I felt the story was a bit flimsy. I get the bringing in elements of extraterrestrial/ contact point, I loved the whole pot from outer space thing, I even respect the bringing in the whole returning, fragile soldier in need, it was the characters themselves. They seemed only mildly developed. At times I just didn't connect with their personal story. Other times the characters and the moments were just spot on!. Directing and the creativity are pretty cool in "Star Leaf". I haven't really scene films on this kind of high outside of Full Moon Horror.

The special effects for the most part are pretty hokey for the most part. But I think that it was intended and even celebrated by the team behind "Star Leaf". This is really meant for a nice, sometimes disturbing trip "through the crack", or say, "down the rabbit hole". The aliens were cool, and done enough to were they didn't seem completely CGI, often they looked more like practical design. All the extra paranormal/supernatural CGI was used in a trippy, hallucinatory aspect that even though it comes off a bit cheap, it still is fun and entertaining.

Overall "Star Leaf" is an entertaining, 420 staple. I mean it is better than "Evil Bong" and I get high to that quite a bit. The ending is a more "life lesson" , hallmark moment situation that, I am sorry, but I thought was a bit lame. Plus when the ending is delivered to us I kind of felt the whole movie was built up around that ending concept and its message. I didn't get any real horror from "Star Leaf" , some definite thriller moments, but I love aliens, and pot. Plus anything that spotlights the emotional and psychological conditions a lot of our soldiers return home in is dope! Pun intended!