New Trailer Released For Special Anniversary Edition Of “Snuff: A Documentary About Killing On Camera” 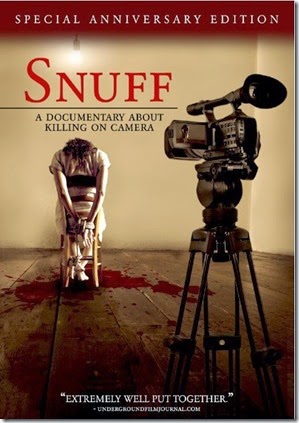 Wild Eye Releasing have issued a new 2015 anniversary edition trailer for their controversial documentary “Snuff: A Documentary About Killing On Camera”. The film is directed by Paul von Stoetzel and explores the “most extreme” cinema taboo of snuff films. Whether these films ever really existed or not, still exist in the underground, or will ever one day tragically become a reality is up for debate with plenty of material out there to explore this topic in great length. Faux films, purported “real” footage, whatever-there is films on the market that claim to be snuff films.

“Snuff: A Documentary…” was initially released on DVD and VOD but the film has been out of print and highly sought after since it’s initial run. Now Wild Eye Releasing are giving fans what they have been “hushed demanding” and “quietly seeking” for years-More copies in the form of a 2015 Special Anniversary Edition that hit market on April 21st. Check out the trailer below and get your copy while you still can. This edition will include new interview with director by author and radio host Dave Schrader and the short film ‘Dinner Date’.

The Ultimate Cinema Taboo. Special Anniversary release of the long out-of-print documentary. Explore the disturbing, pervasive urban legend of the "snuff" film, an alleged film where someone is purposely murdered on camera. This compelling, educational documentary features interviews with film professionals, FBI profilers and academics, who all help examine the myths and evidence of snuff films, and its relationship to cult horror films, serial killers and pornography in our culture.