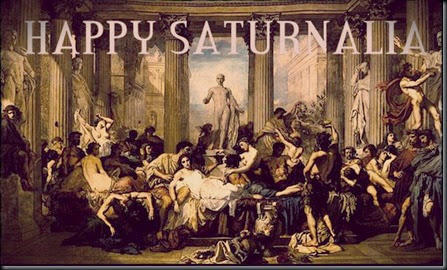 December 17th begins Saturnalia. A festival where roles are reversed. Sound familiar? On Christmas in the UK the same thing happed in Medieval times where the poor and commoner was allowed into the homes of the wealthy and treated to a feast. To this day it is why the people will often adorn the paper crown hats during the Christmas dinner celebration. Now to Saturnalia.  Saturnalia was an ancient Roman festival in honor of the deity, Saturn , held on December 17 of the Julian calendar and later expanded with festivities through December 23.

Saturnalia is a festival of light leading to the winter solstice, with the abundant presence of candles symbolizing the quest for knowledge and truth. The renewal of light and the coming of the new year was celebrated in the later Roman Empire at the Dies Natalis of Sol Invictus, the "Birthday of the Unconquerable Sun," on December 25. Saturnalian license also permitted slaves to enjoy a pretense of disrespect for their masters, and exempted them from punishment. It was a time for free speech. The Sigillaria on December 23 was a day of gift-giving. Because gifts of value would mark social status contrary to the spirit of the season, these were often the pottery or wax figurines called sigillaria made specially for the day, candles, or "gag gifts". A lot of these elements where merged in with the Catholic’s Christmas in order to bring Pagans to Christianity.

Many of the decorations involved greenery - swathes, garlands, wreaths, etc - being hung over doorways and windows, and ornamenting stairs. Ornaments in the trees included sun symbols, stars, and faces of the God Janus. Trees were not brought indoors (the Germans started that tradition), but decorated where they grew.

Food was also a primary decoration - gilded cakes in a variety of shapes were quite popular, and children and birds vied for the privilege of denuding the trees of their treats. The commonest shapes were fertility symbols, suns and moons and stars, baby shapes, and herd animal shapes (although, to be honest, it's hard to tell if some of those ancient cookie cutters are supposed to be goats or deer). I would imagine coins were also a popular decoration/gift.

People were just as likely to be ornamented as the trees. Wearing greenery and jewelry of a sacred nature was apparently common, based on descriptions, drawings, and the like from the era. Although the emphasis was on Saturn, Sol Invictus got a fair share of the revelry as well.

Gold, because the sun is yellow, is always a sure choice for a good Saturnalia decoration. For modern Saturnalia, those golden glass ball ornaments are ideal, as are gold sun faces, gold stars, and gilded anythings. Gilding nuts and pine cones and nestling them among the swags and wreaths of greenery would be a lovely way of acknowledging the ancient roots of this ceremony.

Indoor trees are not ancient Roman, but if you have plants growing indoors, decorating them would certainly be in the spirit of the holidays. If you just have to have the now-traditional indoor tree, try decorating it in gold ornaments with a solar theme. Swathe it in bright red or purple ribbons (2 colors quite in favor with the Romans, and looks great with the gold ornaments). Top the tree with a sun, rather than a star, for after all, this is a solar celebration.

The biggest part of Saturnalia was attitude more than decoration. Feasting, drunkenness, merrymaking, hopefully the conception of more children (or at least enjoying those activities which led to conception!), pranks, gift giving, role reversals (not true ones, only symbolic ones - slaves weren't really free to make a freedman's decisions and anything they did or decreed would reverse at the end of Saturnalia, children weren't really adults and could not enter into any binding contracts or make business deals, etc.) and so forth.

The role reversals seemed to be more for minor privileges - slaves and children got to be waited on for meals, and to lead the rituals, and to participate in the revelry as if they were their parents/masters. The parents/masters jokingly played the part of slaves and children by waiting on them and making rude and bawdy jokes at their expense. Sometimes, it descended into cruelty.

Biblioteca Arcana's suggestions are for celebrating the religious aspects of the Saturnalia and its two adjoining holidays, the Opalia for Saturn's wife, Ops, goddess of plenty, and the Consualia for Consus, "god of the storage bin." The site provides a complete ritual with an equipment list, information on preparation, location, timing, the banquet, and the conclusion. 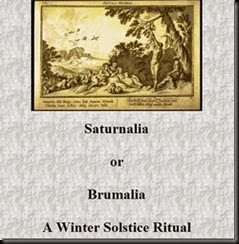