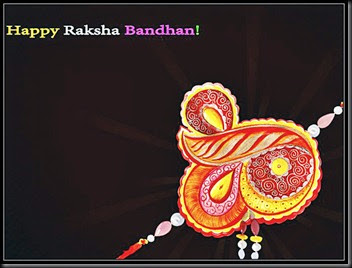 Raksha Bandhan is a Hindu festival that celebrates the love and duty between brothers and sisters;it is held this year on August 10th. The festival is also popularly used to celebrate any brother-sister like loving protective relationship between men and women who are relatives or biologically unrelated. It is calledRakhi Purnima, or simply Rakhi, in many parts of India. The festival is observed by Hindus, Jains, and many Sikhs.

Raksha Bandhan is an ancient festival, and has many myths and historic legends linked to it. For example, the Rajput queens practised the custom of sending rakhi threads to neighbouring rulers as token of brotherhood. On Raksha Bandhan, sisters tie a rakhi (sacred thread) on her brother's wrist. This symbolizes the sister's love and prayers for her brother's well-being, and the brother's lifelong vow to protect her.

The festival falls on the full moon day (Shravan Poornima) of the Shravan month of the Hindu lunisolar calendar. The festival is marked by the several rituals, which vary regionally within India. Typical rituals include:

Days or weeks before Raksha Bandhan, women shop for Rakhi, the ceremonial thread to tie around her brother's (or brother-like friend's) wrist. Some women make their own Rakhi. A Rakhi may be a simple thread, woven and colorful; or a Rakhi may be intricate with amulets and decoration on top of it. Sometimes, a Rakhi may be a wrist watch or men's wrist accessory in the form of bracelet or jewelry. Rakhi in the form of a colorful woven thread is most common. Typically the brother(s) too shop for gifts for the sister, ahead of Raksha Bandhan. The gift from the brother can be a simple thoughtful token of love, and may be more elaborate.

On the morning of Raksha Bandhan, the brother(s) and sister(s) get together, often in nice dress in the presence of surviving parents, grandparents and other family members. If the sister and brother are geographically separated, the sister may mail the Rakhi ahead of the Raksha Bandhan day, along with a greeting card or letter wishing her brother well. The ritual typically begins in front of a lighted lamp (diya) or candle, which signifies fire deity. The sister and brother face each other. The sister ties the Rakhi on her brother's wrist.

Once the Rakhi has been tied, the sister says a prayer for the well being - good health, prosperity and happiness - for her brother. This ritual sometimes involves an aarti, where a tray with lighted lamp or candle is ritually rotated around the brother's face, along with the prayer and well wishes.

May the lord of all beings protect you,
May the one who creates, preserves and dissolves life protect thee,
May Govinda guard thy head; Kesava, thy neck; Vishnu, thy belly;
the eternal Narayana, thy face, thine arms, thy mind, and faculties of sense;
May all negativity and fears, spirits malignant and unfriendly, flee thee;
May Rishikesa keep you safe in the sky; and Mahidhara, upon earth.

After the prayer, the sister applies a tilak, a colorful mark on the forehead of the brother. After the tilak, the brother pledges to protect her and take care of his sister under all circumstances. The sister then feeds the brother, with her hands, one or more bites of sweets (desserts), dry fruits and other seasonal delicacies.
The brother gives his sister(s) gifts such as cards, clothes, money or something thoughtful. The brother may also feed his sister, with his hands, one or more bites of sweets, dry fruits and other seasonal delicacies. They hug, and the larger family ritually congratulate the festive celebration of brother-sister love and protection. The brother(s) wear the Rakhi for the entire day, at school or work, as a reminder of their sister(s) and to mark the festival of Raksha Bandhan.
Posted by A Southern Horror Fan