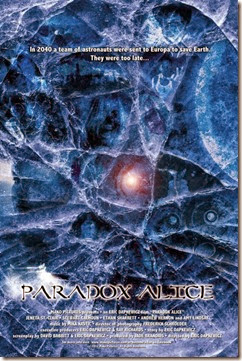 The Orchard announced a release date for sci-fi film “Paradox Alice” as three viral video logs hit the web. The Orchard will be releasing “Paradox Alice” for sale and for rental in the U.S., Canada, Australia, and New Zealand in association with Mako Pictures and Fabrication Films. The Eric Dapkewicz’s directed film will be available on all major digital outlets including iTunes, Amazon, Hulu, X-box, Playstation, and Vudu as well as through Cable VOD on October 15th. A DVD date is to follow but no official date is set for that release just yet. “Paradox Alice” stars Jeneta St. Clair, Stewart W. Calhoun, Ethan Sharrett, Andrew Hernon, Amy Lindsay, Sandra Staggs, Liz Stewart, Jack Brand, Tansy Alexander, Scott Gabelein and Kim Mulligan.

The three viral video logs as well as future excerpts from the film will be featured on ShockTillYouDrop’s new Youtube channel along with special commentary. The material released will be handled by The Orchard. Check out the viral vids below and head over to ShockTillYouDrop’s channel for future material.

The story of “Paradox Alice” is set in 2040 and follows a group of astronauts sent on a dangerous mission to retrieve water from Europa. After narrowly escaping the moon and on their way back home, the team learns that a nuclear war as broken out on Earth living the planet uninhabitable. Just as the male crew come to terms with the devastating fate of Earth, one of the crew members spontaneously transforms into a female. The remaining men turn on one another as tensions rise while each seek to explain the mysterious and terrifying event. Act of God or Biological Imperative, the men via for the female as the truth reveals itself in the shocking finale.