New Teaser Poster For The Return Of ‘The Walking Dead’

As word comes out about the record viewership for AMC’s original series based on the comic about the zombie apocalypse a new poster was released to amp up fans over the epic return to season 3 of ‘The Walking Dead’. It is epic because of the battle the group we have watched survive so much since the fall of society because this time it is not the undead that pose the biggest threat but tyranny from another group of survivors and division among his own. The show saw a historical number of viewers for the mid-season finale on Dec. 2nd raking in a total of 15.2 million watchers. It is the first time a cable television series has ever beat out and totally dominated the fall season. That says a lot, especially when you look back at all the kick ass shows that cable giants like HBO and SHO have created over years not to mention the scores of weekly supernatural dramas that many of us set our weekly calendars by! ‘The Walking Dead’ returns Feb. 10th at 9:00pm.

With his group in tatters, his sanity in question, and his own son questioning his every move, Rick (Andrew Lincoln) must somehow pull everyone together to face their greatest challenge -- the Governor (David Morrissey).  In order to survive, he must risk everything, including the group's very humanity. 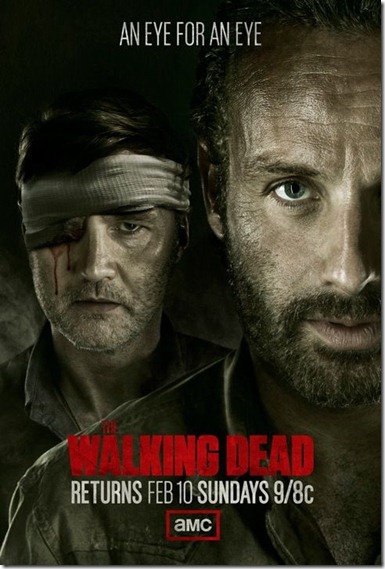