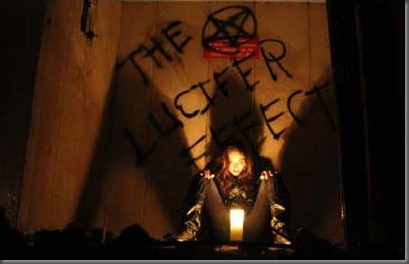 One of the more interesting projects to come along since “The Blair Witch Project” is the story that follows paranormal events surrounding the Rauceby Mental Asylum in Quarrington, near Sleaford, Lincolnshire where eight people volunteered to be in a movie, then locked inside the asylum for three days and the severe psychological effects the experience had on them. “The Lucifer Effect” is the purported footage from the events that transpired. Now whether this is all PR hype around a new spin on a much worn movie premise or the real deal dark side to indie movie making in “cursed” locations you can only decide for yourselves. The information given reads more of a blend of police investigation report and legal disclaimer. Read it for yourselves and decide and check out the trailer.

“The film studies the social condition known as “The Lucifer Effect,” a psychological consequence that is said to occur when “good” people are given power over others in an evil place. The experiment was first conducted in the 1970’s during the infamous Stanford Prison experiment, and now the film’s producers have recreated a modern-day equivalent in an abandoned mental asylum.
Reports of a curse originally surfaced due to the fact that the film features disturbing events that occurred when the participants in the film were taking part in a Ouija board session during their brief stay in the asylum. Unlike other films that it has been compared to, such as The Blair Witch Project or Paranormal Activity, the footage and events in The Lucifer Project are actually real, there was no script and the reactions of the participants are genuine, including the unfortunate assault. As a result the police in Lincolnshire, England, seized the footage and the film was put on hold, creating media attention with coverage in the British press.
Adding to the notion that the film may be heading into unsettling territory, it also uses subliminal imagery and has a secret secondary storyline interwoven in hidden frames beneath the main storyline, which has only fueled the rumors that something very odd is going on.
The film centers around eight people who volunteered for a role in a movie, only to be locked inside a reportedly haunted mental asylum for three days and nights, with no communication from the outside world and little food to eat.
Since these events, two members of the cast have reportedly been hospitalized, with others receiving counseling for any possible after-effects. All involved have signed release forms and given their consent for the footage to be used. Compounding the stories of a curse is the fact that the director who oversaw the filming of the original events is also now missing, with rumors that one of the actresses has been sectioned in South America.
In order to investigate whether the alleged “curse” can have any effects on the public at large, the film has added an innovative social media angle. When anyone activates the trailer on the film’s Facebook and social networking pages, their webcam activates, thereby involving the viewer in what is onscreen. Already there have been reports of doors seen mysteriously opening, shadows appearing and lampshades moving in the background.
The producers added the webcam feature after the curse reports surfaced to pick up on any paranormal activity once the film trailer had been watched. The producers say if anything interesting or unusual is recorded whilst watching the trailer, there is a chance that the recordings will be featured in the final cut of the film when it is released.”


The Lucifer Effect Website
Posted by A Southern Horror Fan