My Review Of "Alien Raiders" 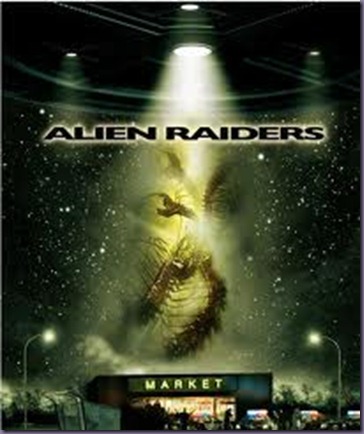 For me “Alien Raiders” was an homage to classic alien horror of the 80’s with films like “The Thing” “Xtro” and “Night Of The Creeps”. The kind where the species is more of a virus or infestation and builds from human DNA to return from extinction on a new planet. Those kind are more horror than sci-fi because the alien becomes more that the creature from outer space. It morphs into a monster and brings out deeper fears in humanity – the fear of one another.

This film attempted quite well to blend those classic aspects of alien horror with a more modern guerilla warfare in middle America. A group of people become renegades on hunt to track down an alien species that are bent on taking over earth by infection and gestation with human as the host.


This film picks up as the story is already in motion for the characters which can be confusing to the viewers sometimes however in this pic it stays smooth and understandable. There is almost a subdued overture to the film due to the constant Christmas muzak in the background and lethargic profiles of several of the cast. Here is the set up: a group of renegade hunters take over a supermarket in a small town while tracking down an invading alien species. It almost seems like a generic robbery by the over-dramatic until they hit the store and the employees realize that something is off about the gunmen. The harsh cruelty of the assailants sends the remaining store workers into a  panic and fear becomes the emotional norm throughout this film.


The action and acting in this film was plausible and fluid between the actors as they battled wits back and forth over the cruelty and importance of the situation. The scenes were well thought of and seemed almost unrehearsed much like a one take scene set up. The action doesn’t stop from moment to moment with blood and screams and back and forth between the alien hunters and hostage negotiators and aliens busting out of bodies and store personnel dropping like flies.

The special effects on this film were thought out they actually put the money in the right place with using organic and true special fx such as blood guts and prosthetic and such instead of depending on CGI like a lot of small films do these days. I think that is why I like this movie so much. It will be timeless were as most of the CGI stuff always seems dated.

The film didn’t attempt to force feed the story on us with a lot of backstory dialogue other than what was necessary and was perfectly weaved with what was happening in the now. The actors didn’t over act or exaggerate their characters which makes the film easy to sit through with annoyances and they didn’t compensate on any absurdities with ridiculous unnecessary humor.

All in all this is a great alien film to watch over and over and I feel they should carry it into a low budget franchise. Plus it happens during the Christmas season, Dec. 20th to be exact so it is a good film for Christmas time to watch. The store is decked out in holiday décor. Really enjoyed this film.
Posted by A Southern Horror Fan