A Better Poster Image For "Cobra: The Space Pirate" 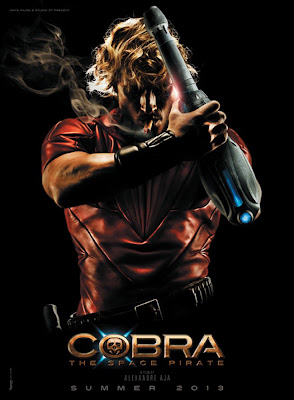 Alexandre Aja is heading back to France for this great Sci-fi vision that will see release sometime in 2013. Aja is the director for such films as Piranha 3D and The Hills Have Eyes.


Johnson, a worker for a futuristic trading company, got woken up on a Sunday morning by his robotic maid, Ben. Ben suggested that Johnson go to the Trip Movie Corporation (T.M. Company), a company that lets its guests experience a dream as if it were real. Johnson asked to be the king of Harlem, surrounded by beautiful women, and commanding a battlestar. In his dream, Johnson as "Cobra" explored space with his partner Lady Armaroid. Cobra wielded the "Psychogun" and fought off monsters from other planets and most of all the Pirate Guild, the leader being Captain Vaiken whom he let loose. Vaiken distributed Cobra's picture to all the other pirates making him a wanted man. When the dream ended a woman asked Johnson how the dream was, Johnson responding, and the woman correcting to the fact it should have been about him being the king of Harlem.
On Johnson's way back home, he crashed into a man speeding in his car. He recognized the man, who looked identical to Captain Vaiken. Johnson started explaining how he looked like Vaiken right in front of him, thus making Vaiken think he knew something about Cobra. Johnson unconsciously lifted his right arm as if he had a gun. Johnson shot a ray out of his hand, killing Vaiken. The shot blew up his arm, revealing the Psycho-gun. Johnson hurried back home, where Ben noticed his arm and Johnson realized that he did not remember anything from the last three years that he had lived in his house. Johnson looked into a mirror, which he turned a nob to reveal a secret room behind it, which he looked inside to see his revolver which he used in his dream. Lady Armaroid came out from hiding within Ben. Johnson started to remember more, and at that moment many people were recruited by the Pirate Guild to come in and kill Johnson. Johnson killed the recruited people and started to remember that he is Cobra and he was wanted by the Pirate Guild and he was sick of fighting them off. In order to get away from them, Cobra surgically altered his face and had his memories erased. Lady Armariod told Cobra that Trip Movie triggered his sub-conscious and instead brought back old memories. Once more, Lady Armaroid and Cobra set off to all the adventures that come forth.
Cobra later meets Jane Royal, one of the Royal sisters, in a bar. Jane Royal teams up with Cobra and Lady to find the other two Royal sisters, whose tattoo maps lead to the greatest treasure in the whole universe.