My Review Of "A Rough Draft" 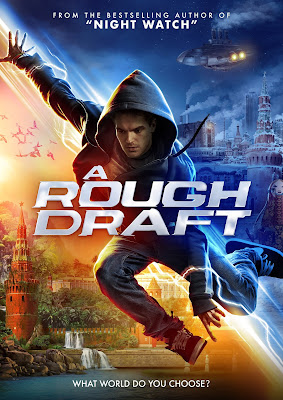 "A Rough Draft" is a sci-fi thriller written by Sergei Lukianenko, author of Night Watch. The film is directed by Sergey Mokritskiy and stars Nikita Volkov, Yulia Peresild and Yevgeny Tsyganov. "A Rough Draft" is a visual, fantastically entertaining sci-fi movie.

Set in and around the concept of open world video gaming, following a man without an identity nor memories who plays middle-man to corresponding worlds. Kirill’s identity has been eliminated. Erased from the memories of everyone around him, Kirill will be forced to serve as the gatekeeper of a portal that connects parallel worlds.

"A Rough Draft"  manages to be a pretty entertaining, highly conceptual sci-fi story. Much like "Night Watch", the film's big theme is alternate realities, filled with near supernatural characters who have learned to manipulate and control destiny. It is instantly a fascinating concept and begs of intrigue. I found the film interesting from the beginning.

Although "A Rough Draft" suffers similar flaws as "Night Watch", lack of depth in regards to character development and a true human touch, the movie gives us a fun ride with cool characters. The writing does hint at cookie-cutter hyperbole, the cast interact with enough comfort to create engaging story development and drama.

The special effects wag between creative high concept CGI elements and mockbuster aspiration. The film is visually stunning with various Moscows showcasing some exciting possible realities. There is some really memorable scenes that almost brings to mind "Inception" level effects, my favorite involves a Matryoshka doll.

Overall "A Rough Draft" is a very entertaining, highly engaging sci-fi action movie with cool effects and stellar cinematics. It isn't quite as high impact as "Night Watch", but it is a proper effort. Still the film does lack true depth inregards to connecting on a personal level. The characters don't completely feel fully drafted. That being said, the movie is worth watching and should be entertaining to sci-fi fans. (3/5)