My Review Of "Intensive Care" 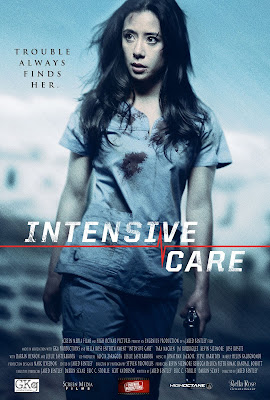 "Intensive Care" is an action thriller directed by Jared Bentley and stars real life stunt lady Tara Macken, with Jai Rodriguez, Leslie Easterbrook and Kevin Sizemore. The film is described as a "fast-paced, no-nonsense homage to uncomplicated, on-the-nose action cinema”. Reminiscent of straight-to-video fight flicks with a strong female lead, "Intensive Care" pays tribute to a subgenre that made stars out of stunt men in the 80's and 90's.

Three low life criminals plan to rob an elderly woman’s home, but her caregiver turns out to be a former special ops agent with an agenda of her own. Ex-special ops turned nurse gives the thieves a fight they will not win.

Jared Bently offers a solid story that frames Macken's skills perfectly. Although the concept is neither original nor all that thrilling, it is action packed entertaining. At times scene execution does waver,  creating moments that weaken an otherwise strong performance. The only real troubles with "Intensive Care" is the lack of room needed to allow Macken's character true depth and development. Then there is times the film confuses itself to whether it is a thriller or comedy, causing some scenes to feel clumsy.

The action sequences are pretty killer. I venture to say that Tara Macken's skills put her up there with Van Damme and Sophia Crawford. The cinematography isn't too original,  the standard angles and framing is pretty basic. Not that that is bad. It works and the quality equals any action,  or fight flick of this caliber. It was appealing but it is all stuff seen before, time and again.

Overall "Intensive Care" is a decent popcorn movie. There is a strong female lead, plenty of action, and a story that maintains a level of entertainment value from start to finish. I would have liked to have seen a bit more character development but still action fans and anyone wanting to see a strong woman kick some butt will enjoy this movie. (3/5)
Posted by A Southern Horror Fan