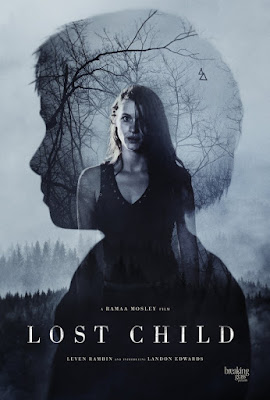 A poster (seen above) and trailer have been released for upcoming thriller "Lost Child". The film is directed by Ramaa Mosley and stars Leven Rambin, Jim Parrack, John Taylor Smith, and Landon Edwards. It is due out September 14th with limited theatrical release. "Lost Child" has a VOD /DVD date set for September 18th.

LOST CHILD follows an army veteran, Fern, who returns home in order to look for her brother, only to discover an abandoned boy lurking in the woods behind her childhood home. After taking in the boy, she searches for clues to his identity, and discovers the local folklore about a malevolent, life-draining spirit that comes in the form of a child; the Tatterdemalion.