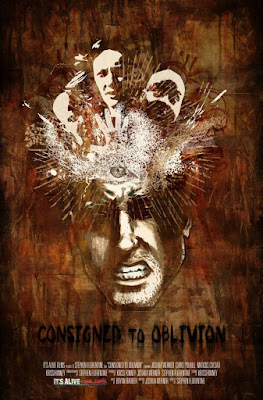 It's Alive Films is set to premiere "Consigned To Oblivion" at Sunrise 45 Film Festival. written by Joshua Werner, directed by Stephen Florentine, the film focuses on an artist frantically trying to recreate the face of someone in his dream on canvas. Testing the limits of his sanity each night he sleeps, he awakes to find the painting evolving on its own, giving him further clues to the face that keeps changing in the dream.

The Sunrise 45 Film Festival, named for its place on the 45th parallel on the sunrise side of Michigan, selected Consigned to Oblivion for its “Friday Night Fright!” horror lineup that begins at 9pm on Friday August 17th. Learn more about the festival and its debut of Consigned to Oblivioncan find further information at Sunrise45.org