My Review Of "Crying Wolf" 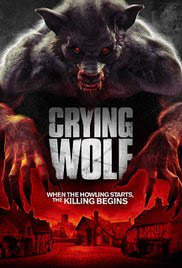 Synopsis: Crying Wolf tells the story of strange and weird goings on in a little English village called Deddington. The gruesome death of local girl Charlotte by a rabid monster causes alarm and revulsion - before desperate reporters, crazy detectives and revenge seeking hunters descend on the scene.

Jopia's story is a fun, quick-witted twist to the Werewolf tale. The movie places the beast as unsuspecting prey against the vengeful. "Crying Wolf" has some colorful and interesting characters that are well developed. Some more so than others. The film is more comedy than horror, but with plenty of spooky nicely shot scenes offering the creature in all its costumey glory. I enjoyed the beast- visually and characteristically in "Crying Wolf". Plus the cast give nice performances as the individuals in the pack.

The special effects are a mixed bag of cool, gory practical effects, and weak disappointing CGI. Jopia does choose the moments for CGI very wisely and frames the scenes in a creative way that make watching the CGI easier for those of us who find the computer animation a turn-off in horror. Oddly enough the thing that makes " Crying Wolf" fall a bit flat is the hokey way the story is set up as comedic schtick, vignettes and flashbacks combined with a cheesy soundtrack more reminiscent of soap operas and webseries.

Overall "Crying Wolf" falls somewhere in the middle of good and bad. There are some quality moments where story and character really entertain and thrill, then there are those pesky times when CGI and dialog fail to sell the story. As a werewolf story this one is weak at beast, as a Brit horror/Comedy it is mediocre, but as for creative , Indie story- "Crying Wolf manages a decent and sometimes amusing tale. The creature design and wittiness are the best aspects for sure!
Posted by A Southern Horror Fan