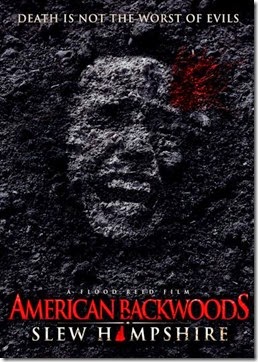 That time all the horrors of a road trip gone wrong met in the woods and ran some cannibal crazed evil up your ass, “American Backwoods: Slew Hampshire” is the terror that unfolded. The film is written and directed by Flood Reed, a man whose lumberjack stature and woodsman appearance is as sexy as it is intimidating. Qualities that are only outweighed by his insanity and talent for creating a “mind-fuck, cluster nut” explosion of entertainment. “Slew Hampshire” stars Dayo Okeniyi, Shawn Thomas, Tyler Rice, PJ Hennigan, Flood Reed, Jeremy Isabella, Michael Todd Schneider, and Claire Dodin.

The story follows some friends out to complete a rite of passage styled road trip to get laid and bond. What happens in “Slew Hampshire” takes that desire and twists it into a perversion of exploitation, and backwood horror that is literally dumbfounding. Seriously there is so many elements of the horror genre colliding in this film that I was delightfully, jaw drop, amazed. Usually films that go for this amount of fast-paced complexity fails big time. “American Backwoods” is not that film. Things hit the g spot from all angles-g as in gore, gratuity, and greatness. Let me just say that somewhere between “Brokeback Mountain” and “I Spit On Your Grave” permeates a nightmare so insane that only Hell could handle its girth. This is that nightmare.

The special effects and gore are visceral, blood-soaked moments of grue that will delight any splatter film horror fan. The cinematography is a blend of campfire horror suspense mixed with grindhouse torture-porn realness. And as if that wasn't enough to pull from Flood Reed brings in some perfectly timed and tuned dark humor that plays with horror comedy, but this film is by no means to be confused with anything currently out there in horror comedy. Whatever crazy that possesses Reed’s mind is a beautiful damnation of artistry and madness. “American Backwoods: Slew Hampshire” is an onslaught of gory awesomeness.

Overall “American Backwoods: Slew Hampshire” is a fun, twisted blend of Darwinian horror and a hunger games of “Deliverance” inspired terror that should make you second guess that road trip to North America’s hidden gems and honey spots. The story is elevated, next level insanity, the characters are dark and evolved. The special effects and atmosphere is exciting and full of classic horror energy placed in a truly modern piece of entertaining terror. A must for any horror fan regardless of which subgenre gets you off!
Posted by A Southern Horror Fan