My Review Of “Billy Club” 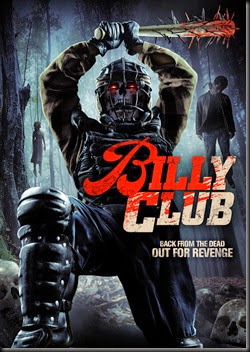 “Billy Club” is a modern slasher flick that utilizes classic horror elements in order to create a contemporary nightmare. One that takes America’s pastime and twists it into a dark pool of grue that is satirical and disturbing. The film is directed by Drew Rosas and Nick Sommers, stars Erin Hammond, Mark Metcalf, Marshall Caswell, Nick Sommer,  Max Williamson, and follows four friends reuniting to commemorate the brutal murder of their little league baseball coach and teammates. The event turns deadly as a vengeful, brutal killer forces them to face their past.

The story is a pretty clever, dark piece of horror that draws on tradition slasher elements like the surrealist atmosphere, horrific backstory, and plenty of blood and gore. “Billy Club” starts with a terrible tragedy that comes back to haunt all those involved. Totally typical and completely perfect for any slasher. It is a set-up that I personally feel never becomes tired. Rosas and Sommers manage to bring out a nostalgia and adoration for classic 80’s horror while creating a truly individual horror story and truly inventive masked slasher. One that is sure to be a modern day slasher icon worthy of franchising.

The acting and direction of the film is pretty standard with a cast that is rough in spots hitting the dialog and timing, but honestly no more than so many films that have come before it. Films that I find myself watching over and over. There are a few too many flashback moments in the film that can seem confusing but really fit when you get to the ending. The ending is one that is clever, well hidden until the very end and really solidifies “Billy Club” as worthy of the awards it has won. The humor is not the comedy “spoof” stuff but a blend of characters that fit into the “loveable losers” category and drug induced humor. It does seem to confuse the overall dark nature of the material but only in the way that several of the characters in the “Friday The 13th” franchise do for those films.

The special effects are all practical, organic, and traditional-no CGI here, at least none that I could tell. The directors never shy away from the kill scenes and showing the gruesomeness of it all, the effects artist has is consistency and quality at a level that the directors don’t have to “insinuate” the brutality so deaths are pretty cool and graphic. The sound effects are a bit garden variety creepiness but work well to create a chilling environment for this nightmare to unfold. The effects in one final scene aren’t quite as stellar as the rest of the film’s gory effects but whatever, 95% of the slaugherfest in “Billy Club” is pretty tight.

Overall “Billy Club” is a worthy slasher film that is an instant cult classic. I enjoyed this film immensely, I connected with the vibe of little league having played up until JV, the nods and homage to classic 80’s slashers are tasteful and not rip-offs, and the killer is just a nightmare. Truly creative and menacing. The cinematography is done nicely, enough of the film happens in darkness (which is how a horror film should be), the scenery and sets are odd, eerie elements that just amp up the chilling subject matter. But mostly the guts and gore are the big draw for horror fans to the film. Definitely check this one out!
Posted by A Southern Horror Fan