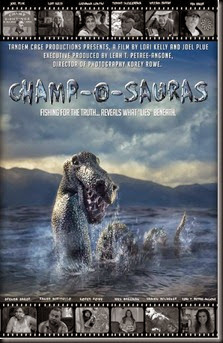 The trailer and official poster have just been released for the micro-budget mocku-mentary film "CHAMP-O-SAURAS" about the infamous Lake Champlain monster "Champ"! It was directed by the very talented duo of Joel Plue and Lori Kelly.

In the Summer of 2014, three Documentary Filmmakers set out to debunk the myth of The Lake Champlain Monster. Town Folks offered little in the way of cooperation, until a reward was offered, and the pranks turned deadly.