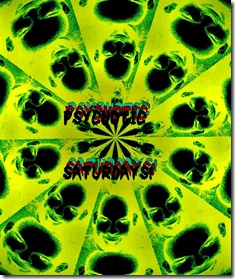 Today is Saturday! The first Saturday of 2013 and time for my first Psychotic Saturdays! Saturday post. I pick six films that horror fans should check out on this day to help you celebrate the crazy. Whether good or bad, big budget or no budget these films where mostly made by people who love Horror. Both Independent and mainstream because they all deserve at least one moment of every horror fans time. This week I have pulled out six psycho slasher flicks that came out in the first decade of the 21st century.

“KillerKiller” was directed by Pat Higgins who directed “Hellbride” and “Trashhouse”. This is a low budget horror flick that turns the tables on the killers. It stars Richard Collins, Scott Deyner, Dutch Dore-Boize, Cy Henty, Rami Hilmi, Danielle Laws, Danny James, James Kavaz and Nick Page. The story is set in a security facility in the middle of nowhere that houses captured serial killers. One by one the inmates are murdered by a mysterious character that looks like a traditional victim of horror movies. All the guards have vanished an a supernatural mist has frozen around the facility preventing the inmates from escaping.

“Psychopath” is about a girl named Sarah who after missing a desperate call from her stranded sister sets off to find her. Accompanied by friends Sarah heads toward a small town called Raven’s Neck. Too bad for Sarah and her friends because a psychotic mental patient has escaped and lurking in the small town. The film stars Kyle Billeter, Glenn Leftwich, Lawrence Wiencek, DaNae West, Russ A. Bryan, Miguel Girona Jr., Crystal Lonneberg and Jeremy Ambler. The movie was directed by Robert Elkins who also directed “Backwoods 2: The Revenge Of Caleb” and “Nightmare At Bunnyman Bridge”.

When a series of haunting murders plagues a small Texas town, law officers Tex Holland and Pike McGraw lead the investigation. The murders turn out to be the most shocking and vile acts of sadism to ever hit the once peaceful community. With a dangerous killer on the loose re-enacting slave punishment on his victims, the cops must face their own personal demons as the murder spree throws them into a dangerous world of mercenary hillbillies and inbred cannibals. “The Minstrel Killer” was directed by Michael Fredianelli who directed “Apocrypha” and “The Fear Of God”. The film stars Michael Fredianelli, Anthony Spears, Vanessa Celso, Aaron Stielstra and Eric Andersen.

“Summer School” was directed by (get this) Lance Henrickson, Ben Trandem, Steve Rhoden, Troy McCall and Mike Nelson. I guess no one director wanted to take full responsibility for this hot mess. It stars Simon Wallace, Amy Cocchiarella, Tony Czech, Lance Hendrickson, Jennifer Prettyman and Ty Richardson. Charles runs a website that reviews "the more macabre of the cinema world" and he has stayed up a bit too late trying to catch up on his work ala a horror movie marathon. In his rapid absorption of an endless series of dark delicacies, Charles has emerged the next day, the first day of Summer School in a bit of a mental flux. He is slipping in and out of consciousness, into a realm of sadistic, genre bending nightmares that test his sanity and question his grip on reality.

“When A Killer Calls” comes from The Asylum and was directed by Peter Mervis who also directed “Dead Men Walking” and “Snakes On A Train”, notice a theme running through The Asylum?! The film stars Rebekah Kochan, Robert Buckley and Mark Irvingsen. It is kind of a knock off of “When A Stranger Calls” but not quite. This film does focus on a babysitter and a psycho killer but it adds the twisted little extra that has the killer sending texts of a family he murdered to the babysitter.

Three teenagers, who sexually abused a mentally retarded girl, are being stalked and brutally murdered by an unknown serial killer seeking vengeance. When a television reporter, who witnessed one of the gruesome murders, tries to investigate further, she gets trapped in this web of bloody revenge and becomes the final target of this deranged murderer. “Silent Bloodnight” was directed by Stefan Peczelt and Elmar Weihsmann. It stars Monica Baci, Robert Cleaner,  Alexander E. Fennon, Andy Freund, Mike Vega and Christine Dune.
Posted by A Southern Horror Fan