Check Out The New Poster For “Apocalypse Kiss” 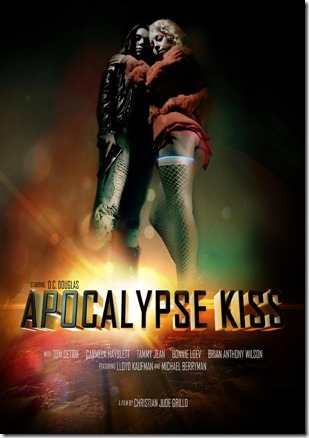 Philadelphia based Potent Media’s “Apocalypse Kiss” is a futuristic epic of the strange and fantastic. Set on the eve of cataclysm as a backdrop “Apocalypse Kiss” finds a city terrorized by a killer dubbed the Red Harvest Killer. As a government agent continues to track down the killer the body count rises. Only it isn’t the Red Harvest Killer responsible for the increased body count. Two nomadic lovers with homicidal tendencies have made there way into city racking up a body count of their own. The new deaths are assumed to be the work of the lone Red Harvest Killer known as Adrian who becomes infuriated by the newcomers association with his work and decides to lead the detective to Katia along with Gladys in an attempt to restore his reputation. As these lives collide no one is aware that the world is spinning into a catastrophe. The film is being directed by Christian Grillo and is set to star Tom Detrik, D.C. Douglas, Carmela Hayslett, Tammy Jean, Bonnie Love and Aimee Cassada.

Initially this film makes me think of the movie “Southland Tales”. The opus inducing suspense and drama as lives spiral into a violent frenzy all the while unaware that they are only moments away from the Apocalypse. The similarity ends at that concept as “Apocalypse Kiss” teases the thrilling collision that is bound to happen as between killers, victims and pursuers alike play a game of cat and mouse in a futuristic landscape. A very interesting premise indeed. Check out the teaser trailer for this imaginative blend of sci-fi and crime noir below and jump over the film’s Facebook Page to show some love. Filming is scheduled to begin on this project in January of next year. Provided we all survive our on prophetic doomsday of course.