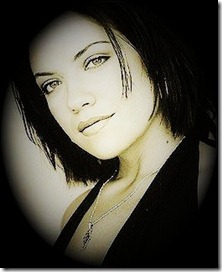 Tiffany Shepis could be the hardest working lady in Indie horror. Here accomplishments are insane and the projects just keep coming. The New York native may not have started out to be a Scream Queen when she began her acting career at the tender age of 12 but considering her love for the genre it was inevitable. She has played ballsy and brazen characters that could hold their own against any testosterone crazed maniac hands down. Her on screen presence is formidable to say the least as the obvious love and passion for her craft comes out and takes over the scene. I have been writing about horror for blogs for four years now and her name mainly focusing on Indie films and Tiffany Shepis’ name comes up a lot in cast listings and for good reason. She kicks ass and often sets the tone for the films personality. Her characters untrustworthy as she stole the money from my favorite pie girl Shannon Elizabeth in the  2009 remake of “Night Of The Demons”. However she really shined as Gina in the twisted and dark tale of underground filmmaking as she set out to break into mainstream films in “She Wolf Rising”. Since then she has played bad beautifully. Her character in “Come On Down” short which is part of the “Psycho Street” trilogy is one bad ass bitch not to be fucked with.

Tiffany Shepis has really played or killed just about every possible nightmare imaginable. Here future projects alone have all been in my personal list of ‘must see films’, notably “Hallow Pointe”, “Model Hunger”, “Hallow’s Eve”, “The Morningside Monster” and the one slasher flick that has been in my happy little nightmare land since word first come out about it- “The Axeman At Cutter’s Creek” by Joston Theney. Recently I got the opportunity to ask her a few questions about her character Denise in “The Axeman At Cutter’s Creek” and the genre she loves (as do we-the fans).

ASouthernLife: In "The Axeman Of Cutter's Creek" your character Denise is a career criminal, how much would you say she differs from your previous roles, and is she some one that you relate to? How do you see her?

Tiffany Shepis: Denise is cool, funny and crazy...traits which I think you would find in most of my characters.  Excited for this one though, very much a 80's throwback, with a twist!
ASouthernLife: The first time you saw Scot in character who convincing was he as the Axeman?

Tiffany Shepis: I have no idea, I haven't started shooting.
ASouthernLife: Do you think Leyla Barker could take him?

Tiffany Shepis: Leyla Barker?? LOL  She's one crazy bitch so I'm sure she would put up a good fight.
ASouthernLife: Is Denise some one that you would hang out with on a Saturday night, or some one you would avoid at all cost?

Tiffany Shepis: I don't hang out on Saturday nights. So if she wanted to watch breaking bad on netflix with me and my husband, she would be more then welcome ; )
ASouthernLife: As for "the Axeman" do you think there is anything good left in him or is he just evil incarnate?

Tiffany Shepis: EVIL...
ASouthernLife: Do you have any aspirations to direct Horror movies in the future?

Tiffany Shepis: Possibly, not at the moment though. I like to leave all that hard work to others.
ASouthernLife: Who was the one Scream Queen you made it a point to meet when you came on to the "Scene"?

Tiffany Shepis: Brinke Stevens.  She was always so cool and classy and fun. PLUS she loves the genre so I was excited to meet her way back when!
ASouthernLife: What movies are in your must have list as a Horror fan (aside from your own work).