My Review Of “V/H/S” Horror Anthology 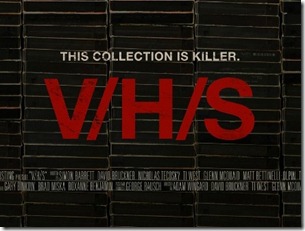 To be honest I did not know what to expect when I set down to view this film. At first I though “oh- another found footage film-cool”. The title alone conjured a lot of nostalgia of glory days running to the vid store to pick up my fair share of 10 rental/ 3 day load of horror flicks. So that alone made me want to see this film. Beyond that bit of pointless stream of consciousness I didn’t have high hopes for the film. Oh ME of little faith! A collection of short films from some of the best todays horror can conjure come together to create some truly inspiring and original views of nightmares and dreamscapes that I have ever seen. This is done in a found footage premise that begins as epic and simplistic as performing a covert task and awakening Satan himself in the process.

“V/H/S” Starts with a simple story of breaking & entering and theft. A small crew is hired to still a simple v/h/s tape. However they enter a realm that is far darker than any Rod Serling could dare to dream of. It is a collection of short and twisted delights envisioned brilliantly and uneventfully by the likes of Ti West, Joe Swanberg, and Glen McQuaid to name a few of the disturbed minds that have gathered in this truly demented Night Gallery. Each on of these directors pull us into the lives of every day people going about their lives who just happen to cross paths with a horrific fate by supernatural means. The stories are dark and at first seem simple enough. Friends on adventures or moving into life changing moments of time that unfortunately venture into a world plagued by psychotic killers, winged demons, and paranormal attacks.

I was so wrong to doubt that this film would be anything but awesome. The segments are intense and pull you into the lives of the characters long enough to make it emotional and intense to see the massacre unfold. The string of episodic nightmares flow perfectly with interludes of terror that press upon the cast in the back story – the thieves. This is truly one of the best things ever to come out of the found footage explosion in genre film making and probably an instant cult classic. For me it was like watching a fictional “Faces Of Death” tape with the same nail biting, tense enjoyment watching and waiting for the carnage to begin. “V/H/S” is definitely in the top 5 of stand out horror films to come out this year. I enthusiastically say see it.
Posted by A Southern Horror Fan