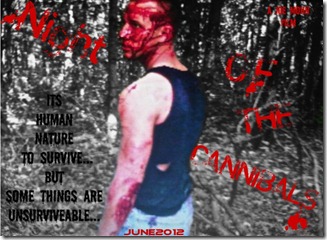 “Night Of The Cannibals” is an upcoming independent horror film written and directed by Joe Mohn. A group of young campers go off for a weekend they'll never forget. Due for release in mid 2012.

The film is about A group of campers who take a trip into far off woods for a weekend of camping and partying, only to find out they're not alone... and just unknowingly added themselves to the menu of hungry cannibals. Check out the trailer.