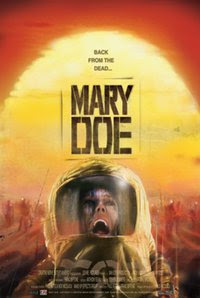 The 1st in the 'Femme Fatale Trilogy'

A twelve-day trek across the desert and the insignificant form that is Mary Doe has exhausted all life within her. Rescued from death's door, she finds herself abandoned with five men, in a decommissioned government facility used for testing biological weapons.

Lost with no memory of who she is and no placement in this world, she finds no reason to want to win her freedom - to journey BACK FROM THE DEAD...

Isolation breeds paranoia - no one can hide from their demons forever. As Mary unravels her past, the world she has fallen into crumbles down around her. The MUTANTS have found their way into the bunker. She has to gather her strength and find a reason to want to live - to want to get out of this HOLE IN THE MIDDLE OF NOWHERE.

Mary Doe is a Horror/Thriller, in the vein of films such as: Alien, The Thing, Dawn of the Dead and The Terminator.

Murder, Deception, Justice... A classic Noir Femme Fatale story set in the world of the BANISHED and the UNDEAD.
Facebook Page Movie Website
Posted by A Southern Horror Fan