Horror should not have happy endings.....ever!

O.k so I finally got around to watching "Altitude", the nightmarish mile high horror yarn about a group of kids too impatient to drive to a concert so they rent a plane. Yeah sounds harmless doesn't it. Well it wasn't harmless at all, the kids are screwed because a creature straight from H.P. Lovecraft's bowels is on the attack! 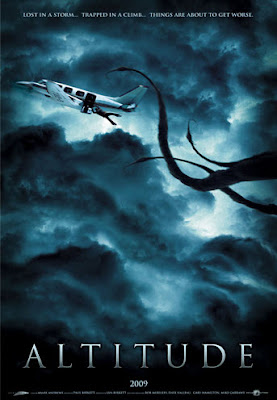 First off let me say that I didn't have any hopes for this movie at all but I liked it!. The story was intense and nerving wrecking to say the least. There were a few flaws in the action that defied logical abilities while over 40,000 feet in mid air, but let me remind you "It is a fictional story about a monster trying to eat kids on an airplane". 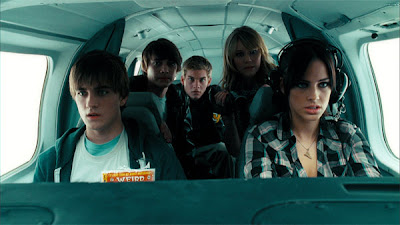 The plot reminded me of classic Twilight Zone storytelling unfortunately the ending was a little too  pleasant for my taste. Back to the movie before the ending screwed it for me, the kids acting was intense and believable for the most part. There are a few scenes where the acting could have been more realistic but it works for this kinda movie. To me it was better than the most of the "original" crap that SyFy throws at us monthly. (minus there few good shows) Anyway, I am no industry person I don't know the technical crap that most people in the biz know. The one irritating thing in the movie to me was the lack of money spent on making the monster look as realistic as ever, after all it was the money maker and when they need to make it pop the FX just phoned it in with generic gaming graphics. The other shorter views of the monster worked because it wasn't on screen too long. 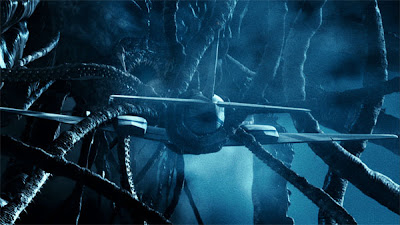 Now HERE IS THE SPOILER! Aside from the one shot where the monster looks cheaply computer generated, and I am not talking about the one shown above, the ending pissed me off! I do not think that there should be happy endings in horror movie, the only survivor should be one if any. The monster or killer is the only thing that should be left standing when the curtain is dropped! History should not have been changed and they should not have survived. There I said it now be pissed but yeah I probably spoiled the movie for most. If I haven't I say see it. It isn't anything special but it comprehensible and budget was good enough to make it work. It is a cool nod to H.P. and Twilight Zone era and me being a kid of those days found this movie fun and gripping, right up till the end. Again the end of this sucked...NO HAPPY ENDINGS IN HORROR MOVIES ...EVER!

I totally agree. I hate it when scary movies have happy endings. If I were to make a horror movie, EVERYONE would die... :)

that is how I feel ...everyone should die in the movie...it's a horror movie...