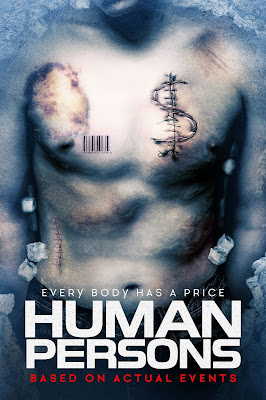 James returns to his native Latin America after 30 years, with just one thing in mind-taking an organ from a human victim and smuggling it back to the United States. On this trip, relives memories of his own violent past, which makes him think twice about redeeming his future.

"HumanPersons" offers a dark, chilling tale that wraps both true crime and urban legend tropes. The film is well written and directed. The characters are portrayed evenly and with conviction. I enjoyed the almost stoic nature of the characters who only interact in reserved masculinity.

That being said, I did find most of the film moved a bit sluggishly. The film started with a strong body horror, chilling opening. However, soon after everything seems to slow down and form into machismo melodrama. There is just too much dialog and exposition revolving around threats, puffed chest pounding and very little action.

Overall "HumanPersons" starts with a great thrilling concept. Unfortunately it gets drowned out by too much talking. The acting is good and even with the cliche archetypes most of the writing is well thought out. Still, for a thriller, this one offered very little thrills. If you want to then check it out - it works as a nice male-driven drama. (2.5/5)
Posted by A Southern Horror Fan