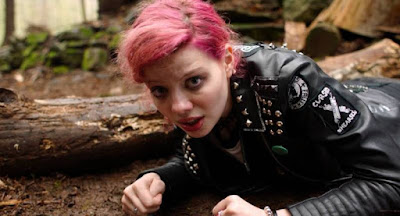 A71 Entertainment acquired the home video rights to genre festival favourite punk rock slasher THE RANGER following the film’s Toronto premier at the Toronto After Dark Film Festival. The deal was negotiated by Susan Curran A71 and 79th & Broadway Entertainment’s Andrew van den Houten, on behalf of the production companies Hood River Entertainment and Glass Eye Pix. Bluray and DVD to be released early January 2019,

THE RANGER follows a group of young punks who are forced to flee the city to lay low, only to run into a park ranger who shares a mysterious past with one of their own. The film has been lauded for its standout performances from Chloë Levine (THE TRANSFIGURATION, THE OA) as the pink-haired punk with a secret, and Jeremy Holm (HOUSE OF CARDS, MR. ROBOT) as the maniacal ranger, ready to get his hands bloody in defense of the woods. Granit Lahu (THE SINNER), Jeremy Pope, Bubba Weiler (PUZZLE), Amanda Grace Benitez (SCHOOL OF ROCK), Jeté Laurence (PET SEMATARY) and horror icon Larry Fessenden (HABIT, WE ARE STILL HERE) round out the cast.


THE RANGER marks the directorial debut of Jenn Wexler, a past Shudder Labs master and producer of the SXSW Grand Jury Prize-winner, MOST BEAUTIFUL ISLAND. A co-production of Glass Eye Pix and Hood River Entertainment, THE RANGER was written by Wexler and Giaco Furino, and produced by Andrew van den Houten (BREAKING & EXITING, THE WOMAN), Larry Fessenden (MOST BEAUTIFUL ISLAND, THE HOUSE OF THE DEVIL), Ashleigh Snead (THE BLOCK ISLAND SOUND), Heather Buckley and Wexler (LIKE ME, DARLING),


“We’re absolutely thrilled to have A71 distribute THE RANGER on home video in Canada,” says Wexler. “The film was born in Montreal’s Frontieres Co-Production Market so it means so much to us that horror fans in Canada will be able to add the film to their collections.”
“Love the movie, love the soundtrack, love the team! What more can I say?” A71 Entertainment’s Head of Marketing and Acquisitions Susan Curran adds, “the Home Video release will be a killer package coming January 2019.”