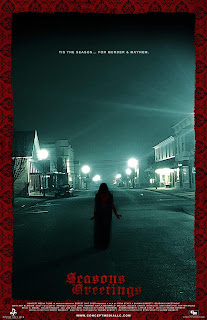 "Season's Greetings" seamlessly finishes with the last half of that brutal revenge piece and gives us some demony delight with "Summon". It is the darkest and most mature of the nightmares found in " Season's Greetings ", and is also the most effective dramatically. Overall this anthology isn't as strong a film technically as " Watch This", but it is entertaining and fun. The effects are cheap, gory good moments that really sell the horror. The big winner in "Season's Greetings" is the musical score and added sound effects, they both were spot on and stellar! If, like me, you enjoy homegrown, low-budget Indie horror, and look for new films to add to the Holiday horror collection then check out "Season's Greetings". It won't be for everyone but I am a fan of Concept Media's work and enjoyed it!
Posted by A Southern Horror Fan