Osiris Entertainment has announced a release date for “Bloodline” on DVD along with the cover art. “Bloodline” is directed by Matt Thompson who also stars in the indie horror along side Jesse Kristofferson, Kimberly Alexander, Gina Comparetto, Christopher Frontiero  and Hell on Wheels'  Grainger Hines. The DVD will hit shelves on January 7th 2014. The film has been described as “Cabin In The Woods” meets “Evil Dead”. 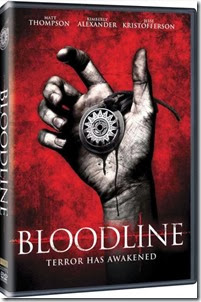 Shot and filmed in the Eldorado National Forest of Sacramento, Bloodline uncovers the eerie past and life of Brett Ethos (Matt Thompson).

Seminary student Brett Ethos falls away from the church and his faith only to find out that his bloodline is sought after by a real evil. On a trip with friends and an old flame, he goes to explore a cabin left to him by the will of his family. There he discovers his true heritage. Temptation or redemption becomes his ultimatum. His friend's lives and his own hang in the balance. -- ENDS