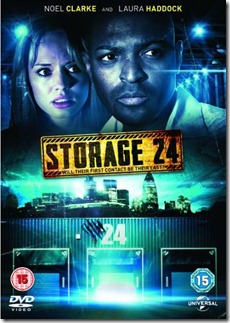 “Storage 24” is a British sci-fi/horror flick that sees several urban lives converge in personal conflict and true terror from out of this world. The film is directed by Johannes Roberts who manages to create a creature feature that is intense and filled with non-stop adrenaline pumping action. The film stars Noel Clark, Colin O’Donoghue, Antonia Campbell-Hughes, Laura Haddock and Jamie Thomas King who play young Londoners who deal with relationship complications while meeting at a local storage yard as one couple deals with a break-up as their best friends give support. During the moment of personal growth experience a very dark and volatile new issue arises as a mysterious object crashes from the sky above and an alien creature escapes from it’s container. They soon find themselves fighting against this monstrous entity as they try to escape the storage facility that has become their death trap.

“Storage 24” is a classic sci-fi nightmare scenario in that unsuspecting people soon find they are easy prey for a creature far more terrifying than the struggles of urban life. The film starts with a casual approach that allows only a small emotional window to become emotionally connected to these characters before the action kicks in. It is enough though to actually realize just the intense dynamic of the group of friends that are trapped in the facility after the crash shuts down the security system locking them in the storage units. The characters are slightly stereotypical and there is nothing new or experimental with how they are scripted but in this film there really doesn’t need to be and the actors portray the characters well enough to draw you into their plight. There is friction within them on personal levels which and to the intense drama of the story and the alien effects are above standard as well as the other effects used in this film. The action and atmosphere is standard Brit fashion in that the intensity brings casually then builds into a high speed thrill ride with only dark eerie moments to gather your breath before even bigger moments of intensity explode on screen. The film doesn’t add anything new to the creature feature equation that such films offer horror fans but it does show how well the system can be if executed properly. This is one of the better sci-fi/horror films that I have seen since “Alien Raiders”. It doesn’t try to explain the origin or over complicate the story by adding layers of subplots to the point the film becomes diluted with unnecessary dialogue. The film just exists as a really clean and thrilling story of survival from a truly vicious creature. I really enjoyed this film. It was worth the instant rental price and can’t wait to add the DVD to my shelf in January 2013!
Posted by A Southern Horror Fan