My Review Of “Treasure Chest Of Horrors II” 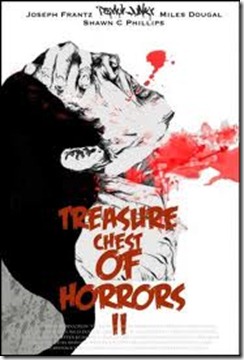 “Treasure Chest Of Horrors II” is the second in the anthology series from Psykik Junky Pictures. This time around it is hosted by Mona Screamalot and her clan of delinquent family members. There are six tales of bizarre, psychotic plays of truly twisted visions. The anthology like a lot of the films I have come to know from these guys are a total tribute to Kaufman and TROMA studios. I am glad to see the new generation of indie minds that TROMA has contaminated finally making their presence known. I loved the old TROMA stuff and much like those flicks these shorts carry that same demented theme of outlandish characters and unusual and outlandish stories of twisted lives. Low budget this tacky is such a treat to enjoy especially when the humor is so dark and witty.

Trendish is a hilarious off-beat short that is straight out of a hallucinatory dreamscape. It is a truly black comedy that is completely bizarre. This is a fun twisted little short film.

Baby Cakes is a strange and gross short film. There are some funny moments, dark but funny. I did enjoy the “baby tamer”. He is hilarious on screen.

Bloody Hell is an unusual but darker story that makes absolutely no sense. “Kids prospecting for oil in the middle of the woods in 2012 America?!” That aside it takes a serious tone which allowed for a creepier story. Still it is a “What The Hell” short film that made no sense at all to me. I did like the voice over effect.

The Prom is another strange and off-beat short. It is filled with a lot oddities. It is twisted and funny.

The Caged Girl? What a twisted tale indeed. A story of obsession and relationships in bizarro world. Like most of the shorts in this anthology this one is totally TROMA. This is a love psychotic.

Pain In The Gums is a short that is weird. It is a glimpse into Psychoville. It is very out there and has classic Kaufman written all over it. It is gross and unusual and hilarious.

If you love low budget gross-out flicks that true to the style set forth by cult gurus like Lloyd Kaufman and TROMA studios then you will enjoy this anthology. It is low brow, funny and tacky. It is also very entertaining and Shawn C. Phillips is hilarious.
Psykik Junky Pictures
Posted by A Southern Horror Fan