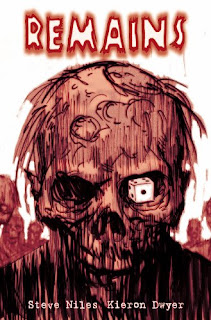 Based on the IDW Publishing graphic novel written by Steve Niles (30 Days of Night) and illustrated by Kieron Dwyer, Remains is set in a chilling post-apocalyptic Reno, Nevada, and follows the survivors of a bizarre accident that reduced most of the world’s population to zombies. The group takes refuge in a vacant casino and fights a losing battle against the undead, who grow steadily stronger, smarter and more aggressive by the minute. Remains is written by John Doolan and directed by Colin Theys; Andrew Gernhard and Zach O'Brien will serve as producers for Synthetic Cinema International.

Remains is the second of three confirmed original projects for Chiller this year, production having recently wrapped on Brian Keene’s Ghoul (starring Modern Family’s Nolan Gould). The original movies will be followed closely by the premiere of the original special Chiller 13: Horror’s Creepiest Kids (from Associated Television International).

Chiller is the only cable channel devoted to delivering viewers round-the-clock scares. Chiller’s eclectic slate of adrenaline-fueled, soul-stirring entertainment includes a broad offering of films, including feature-length premieres every Friday, international programming (Afterlife, Apparitions), documentary and reality shows (Fear Factor), anthology series (Masters of Horror) and some of the most thought-provoking and suspenseful series ever on television (Buffy the Vampire Slayer, The Twilight Zone, Tales from the Darkside, Outer Limits). Chiller is currently available in over 40 million homes. To learn more, visit: www.chillertv.com. Chiller. Scary Good.