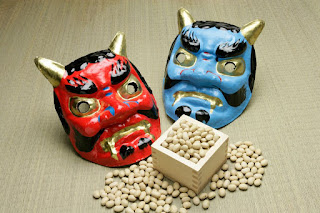 
Setsubun (節分) is the day before the beginning of spring in Japan. The name literally means "seasonal division", but usually the term refers to the spring Setsubun, properly called Risshun (立春) celebrated yearly on February 3 as part of the Spring Festival (春祭 haru matsuri).In its association with the Lunar New Year, spring Setsubun can be and was previously thought of as a sort of New Year's Eve, and so was accompanied by a special ritual to cleanse away all the evil of the former year and drive away disease-bringing evil spirits for the year to come. This special ritual is called mamemaki (豆撒き, "bean scattering"). Setsubun has its origins in tsuina (追儺), a Chinese custom introduced to Japan in the eighth century.
At Buddhist temples and Shinto shrines all over the country, there are celebrations for Setsubun. Priests and invited guests will throw roasted soy beans (some wrapped in gold or silver foil), small envelopes with money, sweets, candies and other prizes. It is customary in Kansai area to eat uncut makizushi called ehō-maki (恵方巻, lit "lucky direction roll"), a type of futomaki (太巻, "thick, large or fat rolls"), in silence on Setsubun while facing the year's lucky compass direction, determined by the zodiac symbol of that year.