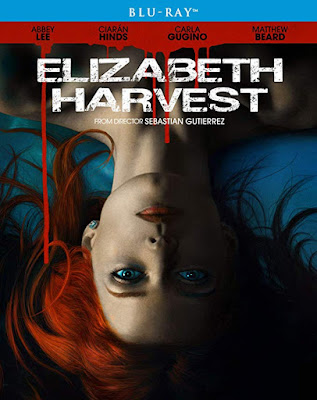 
Nothing is as it seems in this brain-bending plunge into our darkest desires. Making its Blu-ray and DVD debut on December 4, 2018, from Scream Factory in conjunction with IFC Midnight, Elizabeth Harvest casts a spell of creeping Gothic menace as it unravels a disturbing tale of identity, obsession, and twisted love. The release also includes a making-of featurette as a bonus feature, and fans can pre-order their copies now from ShoutFactory.com

In Elizabeth Harvest, Elizabeth (Abbey Lee, The Neon Demon), a beautiful young newlywed, arrives at the palatial estate of her brilliant scientist husband Henry (Ciarán Hinds, Justice League). Ensconced in modernist luxury with an obedient — if slightly unsettling — house staff (Carla Gugino, Gerald’s Game and Matthew Beard, The Imitation Game), she has seemingly everything she could want. But one mystery tantalizes her: what is behind the locked door to Henry’s laboratory that he has forbidden her to enter? When an inquisitive Elizabeth dares to find out, everything she thought she knew about her husband — and about herself — will change.