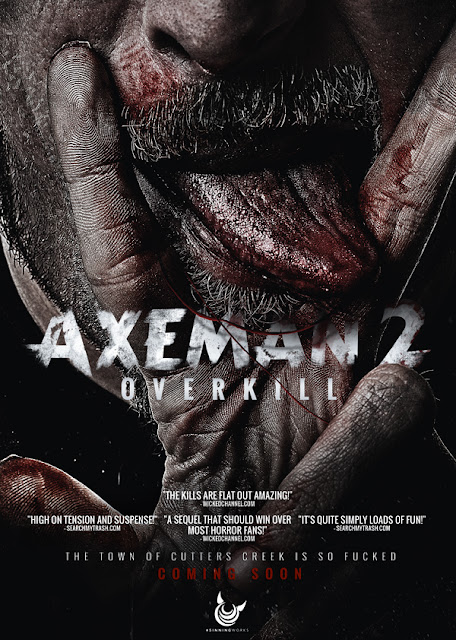 "I think this poster more accurately conveys the tone of the film,” El Rey responded when asked why it changed so drastically. “While the previous artwork was cool, it felt a little wooden and dry. This film is dark and sick. It’s crude and vulgar, it’s over the top and bloody. And I feel this new poster does a better job of setting up what the audience is in for.”

This upcoming film marks the return of the Axeman at Cutter’s Creek since the 2014 release of the original. When asked what’s different about this installment, the filmmaker laughed, “it lives up to its name. Overkill has two different definitions – one means too much of something, the other means ‘the amount by which destruction or the capacity for destruction exceeds what is necessary.’ We are definitely the second one!”

Axeman 2: Overkill is unrated and releases on VOD and DVD/Blu-ray October 17th worldwide. Information on rental/purchase locations is forthcoming. Stay up to date by following the film on Facebook at @AxemanAtCuttersCreek.