Digital Release Details For "Mark Of The Witch" 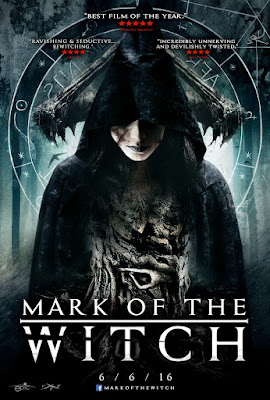 If you haven't already checked it out, Epic Pictures release their acclaimed horror "Mark Of The Witch" on 6/6/16.

Labeled by Paranormal Underground Magazine as "one of the most beautiful films about witchcraft ever seen," MARK OF THE WITCH follows Jordyn, a beautiful young woman who is driven into a dark underworld of demonic possession, desire, and extreme indulgences when she learns she may be the devil's daughter.

The film was included in the official selection of over 15 film festivals worldwide, and awarded Best Cinematography at Fight Night Film Fest 2014 and Best Editing in Action at the Film International Film Festival 2014.

Director Jason Bognacki, genre film favorite Maria Olsen (Paranormal Activity 3, Starry Eyes and Meir Zarchi's I Spit On Your Grave: Deja Vu) and rising star Paulie Rojas (Down and Dangerous, The Last Resort) are all available for interviews. Screeners are also available for review consideration, and we are happy to provide you with art, clips, or any additional information you may need."