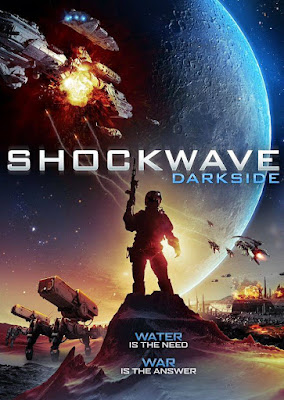 Sci-fi mindbender Shockwave Darkside orbits VOD January 5 from Uncork’d Entertainment, and we have writer-director JAY WEISMAN available for interviews. Would you be keen to speak to him?
Starring Bill Sage (Boardwalk Empire), Mei Melancon (Nightmare Code), Sonequa Martin-Green (The Walking Dead) and Rich Ceraulo (Supergirl), the “enjoyable and intelligent” (SFCrowsNest)  mesh of visual effects and chair-gripping thrills was a ten year labour of love for writer-director Jay Weisman.
Five soldiers, shot down and behind enemy lines in a battle over water, frozen in the deep craters of the lunar surface, find themselves marooned on the dark side of the moon. With depleting air and supplies, they have no choice but to start a dangerous trek through hostile territory. As their numbers dwindle and nerves fray, they make an amazing discovery about the moon that just might save their lives, but destroy the very cause that they are fighting for.

Inspired by the storytelling of classic science-fiction literature from the 50's, but with a 21st century twist, Shockwave, Darkside is an exciting, thoughtful and timely exploration of the tense collision between faith and reason.