Promo Poster And Details For Horror Comedy "Hacked Off" 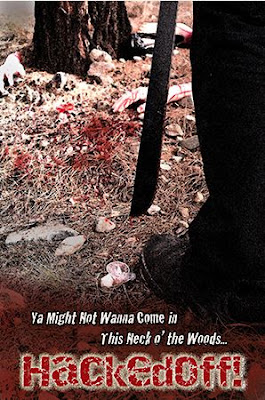 Check out the promo poster for upcoming horror comedy "Hacked Off". The film is part of a three-feature project set to film in Louisiana later this year or early 2015. The other two films are "Grizzled!", and "Happy Ending". Two more comedy horrors with unique and stylized spins on the genre.

Hacked Off! introduces the world to Junior Hodder, the youngest member of a murderous backwoods psychobilly clan. He doesn't want to slay the sexy young girls he encounters in the forest--he'd rather get to know them better--but his Ma has something to say about that!

Hacked Off! boasts the talents of Horror HeartThrob Victoria De Mare (Werewolf in a Womens Prison, Killjoy Goes To Hell) Erik A. Williams (The Heart: Final Pulse) and Olsen herself (Starry Eyes, Vile, Paranormal Activity 3, Gore Orphanage), all of whom will also be seen in the other two films.