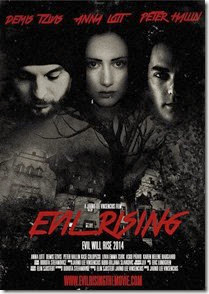 A new trailer has been released for horror film “Evil Rising”. The film is directed by Jarno Lee Vinsencius and is due out toward the end of the year. It stars Demis Tzivis, Anna Lott, Kase Chlopecki, Peter Hallin, Livia Tsirk, Karen Haugaard, and Asko Päiviö. “Evil Rising” is a Swedish scare flick that plays on paranormal thriller elements keeping with a modern investigation nightmarish scenario.

Five paranormal investigators spend a weekend at a haunted mansion to investigate paranormal activity. When one goes missing they realize their lives are in danger.