Straight from the German underground, one of the most shocking and controversial films ever made finally arrives onto DVD. Massacre Video proudly presents Marian Dora's 'Voyage To Agatis,' completely uncut and uncensored! “Voyage To Agatis” will be  available for pre-order on March 11th, 2014 with a street date set for April 8th, 2014. 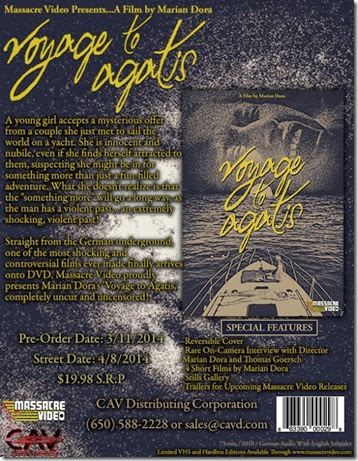 Synopsis: A young girl accepts a mysterious offer from a couple she just met to sail the world on a yacht. She is innocent and nubile, even if she finds herself attracted to them, suspecting she might be in for something more than just a fun-filled adventure. What she doesn’t realize is that the “something more” will go a long way, as the man has a violent past… an extremely shocking, violent past!