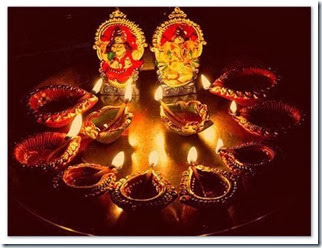 Nov. 3rd is Diwali : also called Divali,[ Deepavali or the "festival of lights", is a five-day Hindu festival which starts on Dhanteras, celebrated on the thirteenth lunar day of Krishna paksha (dark fortnight) of the Hindu calendar month Ashwin and ends on Bhaubeej, celebrated on the second lunar day of Shukla paksha of the Hindu calendar month Kartik. Dhanteras usually falls eighteen days after Dussehra. In the Gregorian calendar, Diwali falls between mid-October and mid-November.

For Hindus, Diwali is one of the most important festivals of the year and is celebrated in families by performing traditional activities together in their homes. For Jains, Diwali marks the attainment of moksha or nirvana by Mahavira in 527 BC. For Sikhs, Diwali is particularly important because it celebrates the release from prison of the sixth guru, Guru Hargobind, and 52 other princes with him, in 1619. Arya Samajists, celebrate this day as Death Anniversary of Swami Dayanand Saraswati. They also celebrate this day as Shardiya Nav-Shasyeshti.

Each day of Diwali has its own tale, legend and myth to tell. The first day of the festival Naraka Chaturdasi marks the vanquishing of the demon Naraka by Lord Krishna and his wife Satyabhama. Amavasya, the second day of Deepawali, marks the worship of Lakshmi, the goddess of wealth in her most benevolent mood, fulfilling the wishes of her devotees.Amavasya also tells the story of Lord Vishnu, who in his dwarf incarnation vanquished the tyrant Bali, and banished him to hell. Bali was allowed to return to earth once a year, to light millions of lamps to dispel the darkness and ignorance, and spread the radiance of love and wisdom. It is on the third day of Deepawali — Kartika Shudda Padyami that Bali steps out of hell and rules the earth according to the boon given by Lord Vishnu. The fourth day is referred to as Yama Dvitiya (also called Bhai Dooj) and on this day sisters invite their brothers to their homes.

All the simple rituals of Diwali have a significance and a story to tell. The illumination of homes with lights and the skies with firecrackers is an expression of obeisance to the heavens for the attainment of health, wealth, knowledge, peace and prosperity. According to one belief, the sound of fire-crackers are an indication of the joy of the people living on earth, making the gods aware of their plentiful state. Still another possible reason has a more scientific basis: the fumes produced by the crackers kill a lot of insects and mosquitoes, found in plenty after the rains.

10 Reasons To Celebrate Diwali. I am not Hindu. I consider myself a Polytheistic Neo-Pagan, I choose to incorporate various gods and rituals from many of the pagan religions much as the ancient Romans did. Diwali is one that I really like from Hinduism.

1.Goddess Lakshmi’s Birthday: The Goddess of wealth, Lakshmi incarnated on the new moon day (amaavasyaa) of the Kartik month during the churning of the ocean (samudra-manthan), hence the association of Diwali with Lakshmi.
2. Vishnu Rescued Lakshmi: On this very day (Diwali day), Lord Vishnu in his fifth incarnation as Vaman-avtaara rescued Lakshmi from the prison of King Bali and this is another reason of worshipping Ma Larkshmi on Diwali.
3. Krishna Killed Narakaasur: On the day preceding Diwali, Lord Krishna killed the demon king Narakaasur and rescued 16,000 women from his captivity. The celebration of this freedom went on for two days including the Diwali day as a victory festival.
4. The Return of the Pandavas: According to the great epic ‘Mahabharata’, it was ‘Kartik Amavashya’ when the Pandavas appeared from their 12 years of banishment as a result of their defeat in the hands of the Kauravas at the game of dice (gambling). The subjects who loved the Pandavas celebrated the day by lighting the earthen lamps.
5. The Victory of Rama: According to the epic ‘Ramayana’, it was the new moon day of Kartik when Lord Ram, Ma Sita and Lakshman returned to Ayodhya after vanquishing Ravana and conquering Lanka. The citizens of Ayodhya decorated the entire city with the earthen lamps and illuminated it like never before.
6. Coronation of Vikramaditya: One of the greatest Hindu King Vikramaditya was coroneted on the Diwali day, hence Diwali became a historical event as well.
7. Special Day for the Arya Samaj: It was the new moon day of Kartik (Diwali day) when Maharshi Dayananda, one of the greatest reformers of Hinduism and the founder of Arya Samaj attained his nirvana.
8. Special Day for the Jains: Mahavir Tirthankar, considered to be the founder of modern Jainism also attained his nirvana on Diwali day.
9. Special Day for the Sikhs: The third Sikh Guru Amar Das institutionalized Diwali as a Red-Letter Day when all Sikhs would gather to receive the Gurus blessings. In 1577, the foundation stone of the Golden Temple at Amritsar was laid on Diwali. In 1619, the sixth Sikh Guru Hargobind, who was held by the Mughal Emperor Jahengir, was released from the Gwalior fort along with 52 kings.
10. The Pope’s Diwali Speech: In 1999, Pope John Paul II performed a special Eucharist in an Indian church where the altar was decorated with Diwali lamps, the Pope had a ‘tilak’ marked on his forehead and his speech was bristled with references to the festival of light.