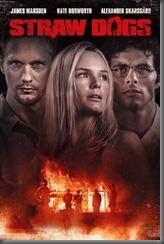 “Straw Dogs” is a remake of the 1971 cult classic starring Dustin Hoffman. I must admit that I have not seen the original so my review is based totally on the 2011 version as it is.. This version stars Kate Bosworth, James Marsden, and Alexander Skarsgard just to name a few of Hollywood’s elite that appear in this film. There are several top names in the grindhouse styled thriller.
Set in Blackwater, Mississippi the story throws up so many red flags that would say “ stop-turn around- go back” to any sane city person. Right from the moment this film starts there is an air of emasculation that you feel as the couple enter the city limits where ruff neck politics and testosterone rule. Especially having experienced such emotion personally as a Southerner who has ventured many times into places where the environment was not so warming.
“Straw Dogs” has a steady slow build to a brutal climax of intense fear. The irony of this viewing experience for me is the fact that I found every man in Blackwater suspicious and untrustworthy. Like red lights flashing in my brain in almost every scene where the couple intermingles with the locals, even though Kate plays a hometown girl returning after the death of her father and a recent hurricane to restore the family home. Now for the ironic part, I come from a small town, lived the majority of my life in small towns nestled in the deep south and yet I became prejudiced against these “straw dogs”.
The downside to this film for me was the fact that it takes nearly 50 minutes for the movie to become dramatically interesting. The violence and rape aside, “Straw Dogs” walks a close line of stereotyping rural cultures that tend to flow differently than “civilized” city life. The crude barbaric depiction of Southern men as sex offending ill-tempered ruff necks next to women who are objectified and demoralized almost become intolerable but even with this aspect, the suspense and intensity of this film as a thriller can not be denied. “Straw Dogs” does what it sets out to do – keep you on the edge of your seat until the very end. The last 25 minutes of this film are almost worth the wait!
Posted by A Southern Horror Fan