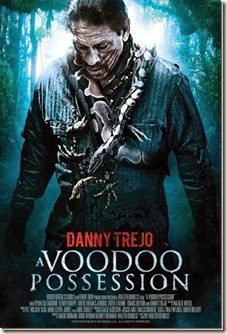 Check out the trailer for “A Voodoo Possession”. The film is directed by Walter Bohoist and stars Danny Trejo, Ama Amoafo-Yeboah, Davante Bell, Tomas Boykin and Dominic Conti. It is expected to be released January 14th 2014 on DVD/VOD.

Imagine an insatiable demon that feeds on blood, thrives on pain, and reaches from beyond the grave to torment the living...and the dead. For believers and skeptics alike, there is nothing in this world or the next to rival the relentless evil of a Voodoo Possession. Burdened since childhood with a gnawing sense of guilt, cynical Aiden Chase journeys to a Haitian insane asylum in search of his missing brother. Upon arriving, he discovers all the inmates and the hospital administrator (Danny Trejo, Machete) are seemingly possessed by a bloodthirsty voodoo spirit. Now, Aiden must abandon reality and descend into a terrifying spirit world to try to rescue his brother - or they will both be damned for eternity.