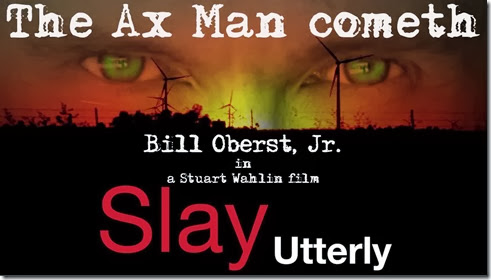 It has been awhile since I heard anything from this film but it seems that Stuart Wahlin’s indie film just received a huge surge of bloody awesomeness. Wahlin has announced that horror madman, and indie icon Bill Oberst Jr. has signed on to "Slay Utterly" both as an actor and producer.

The film, to be shot in 2014, is a modern adaptation inspired by the Villisca (Iowa) ax murders of 1912, which were also the subject of Wahlin’s 2013 documentary, The Ax Man Enigma, which built a compelling case pointing to a lone “Ax Man” being responsible for dozens of eerily-similar murders throughout the nation’s heartland during a two-year period.

Slay Utterly will be the writer-director’s second feature film. Wahlin’s first narrative feature, Hand of Glory (2012), earned the filmmaker “Best Director’ at the Prairie State Film Festival in Chicago last year, and “Best Actress” for Heather Dorff (Truth or Dare, What They Say).

Having earned over a hundred credits in a five-year period, Oberst is considered the hardest-working actor in horror, if not indie film as a whole. Among numerous awards and accolades, Oberst recently took home “Best Actor” from the Pollygrind Underground Film Festival in Las Vegas for his role in Coyote, which also won “Best Picture.”

“Bill is much more than just a horror actor,” Wahlin said of his film’s star. “He’s a tremendously-talented artist who’s going to win an Oscar someday. Though I think his fans will get what they expect from him, this is a film that gives Bill a little more depth to flex his acting prowess in a very conflicted, sympathetic role.”