My Review Of “Another Kind” 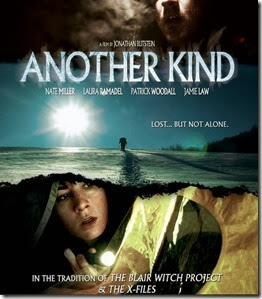 You know when you see certain films and they just seem to stay with you well after you have watched them? “Another Kind” is one of those films. I really didn’t know what to expect when I set down to watch-alone, at 1 a.m. but man was I I pleasantly surprised.  More so than any other film I have watched that boasted claims such as the description to “Another Kind” declared. In the tradition of “Blair Witch Project” and “The X-Files”. A lot of films claim to be comparable to iconic films such as these but very few really deliver. So not the case with this little indie film. Before I get into the depth of how cool, and entertaining the film is I need to give some background info on “Another Kind”. The film’s directed by Jonathan Blitstein and stars little known actors Jamie Law, Nate Miller, Laura Ramadei and Patrick Woodall. The story follows the four on a winter snowshoeing/camping trip into the wilderness in the Catskills to gear up for a future adventure at Mt. Everest. The adventure turns tragic as a series of mishaps prove to be more than the amateur outbackers can handle. It is a nightmare that only hints at the bigger horror happening around them.

Now for my thoughts on this little gem of a thriller. “Another Kind” has one of those story elements that keeps you on the edge, guessing what really is going on from the moment the characters snowshoes get strapped on. The atmosphere of the film is one of solemn unease. You almost feel the tragedy from the beginning of the film even before anything significant happens. There is just a well conveyed sense of  apprehension that seemed to infect me as I watched the film. The actors do an above apt  job bringing these characters to life, it is impressive just how comfortable they seem in front of the camera. The performances are genuine and engaging. I felt invested in the characters wellbeing which intensified the chilling nature of the story. In all honesty “Another Kind” reminded me more of “Yellow Brick Road” with a surprise sci-fi twist ending. I bounced back and forth on whether the film was a nightmare flip out of psyches or if the things were really happening that I was seeing on screen.  The film gives good thrills.

The special effects are limited, but mostly because there are very few moments in the film that require anything extra, “Another Kind” works more on psychological horror and tension than physical gruesomeness. The sound track and nightmarish situations are what pull the punches with this film, punches are more often creepy and unsettling with almost no lull. The sounds and cinematography used in “Another Kind” is reminiscent of the classic age of horror films from the late 70’s and early 80’s. Not with gimmicks but with a natural style just seems timeless and recognizable. Oh and the ending on this film remains pretty elusive right up until the very end, and it is a cool ending that I was not expecting. I knew there was a certain sci-fi component because of the title and possible truth behind the events that unfold in the film, I just wasn’t expecting the ending that happens in “Another Kind” and it was rewarding. This film actually made me a bit uneasy after it was over, considering I live in the mountains, surrounded by forests that can be pretty frickin’ creepy at times. See this movie, it doesn’t disappoint.
Posted by A Southern Horror Fan