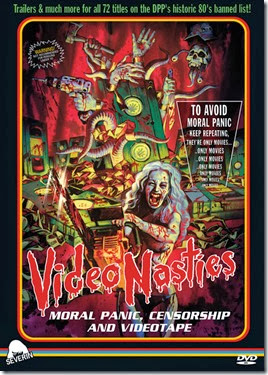 The video nasty era in the UK in the early 80's is now notorious among horror fans for branding movies like THE EVIL DEAD, DRILLER KILLER, CANNIBAL HOLOCAUST, and ZOMBIE FLESH EATERS as likely to deprave and corrupt those who view them in British homes. Says David Gregory of Severin Films, “Nucleus’ collection was a smash hit in the UK both critically and commercially, and with more and more awareness recently in the US of the notorious ‘nasties’, from books on the subject, to festivals celebrating the condemned films, to ours and other labels’ releases proudly touting “Banned in Britain”, there’s no reason why the set shouldn’t resonate with US fans of horror and exploitation cinema.”

Severin Films have released titles from the official nasties list in the past, such as THE HOUSE ON STRAW HILL, BLOODY MOON, DEVIL HUNTER, and CANNIBAL TERROR, and have more lined up for 2014. Severin co-founder Carl Daft continues, “David and I have known Marc Morris of Nucleus since we were in high school. We used to trade illegal nasties at dodgy all-night horror shows at London’s legendary Scala Cinema. There couldn’t be a better collection to start our partnership of releasing their carefully selected compilation discs from the labyrinthine archive of Mr. Morris.”

Morris adds, “My partner, Jake West, and I are delighted to be in business with David and Carl as we obviously share similar sensibilities when it comes to our tastes in exploitation cinema — both of our labels debuted with Just Jaeckin’s GWENDOLINE on different sides of the pond back in 2006.”

Nucleus co-founder and filmmaker Jake West (DOGHOUSE, EVIL ALIENS, ABCs OF DEATH) concludes, “We’ve been talking for years with David and Carl about finding something to work on together, and now’s the time to do it.”

VIDEO NASTIES will be followed up by GRINDHOUSE TRAILER CLASSICS VOLUME 1, and more will be released throughout 2014.