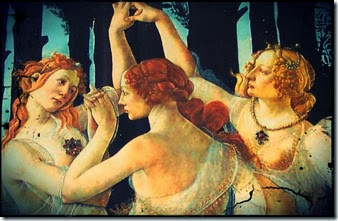 December 3rd is the day of the ancient Roman festival of Bona Deo (The Woman’s Goddess). Read about her below and see why tomorrow will be a great day to celebrate those special women in your life or your own feminine side. Remember, the universe works on the principle of balance, so does the spirit, and mind. Good food, good wine, and an all around good day of festivities. Bona Dea ("The Good Goddess") was a divinity in ancient Roman religion. She was associated with chastity and fertility in women, healing, and the protection of the Roman state and people.

Bona Dea, ( Latin: “Good Goddess”) in Roman religion, deity of fruitfulness, both in the earth and in women. She was identified with various goddesses who had similar functions. Bona Dea ("The Good Goddess") is both an honorific title and a respectful pseudonym; the goddess' true or cult name is unknown. Her other, less common pseudonyms include Feminea Dea ("The Women's Goddess"), Laudandae...Deae ("The Goddess...to be Praised")., and Sancta ("The Holy One"). She is a goddess of "no definable type", with several origins and a range of different characteristics and functions. Roman historians speculated her true name and identity. Festus describes her as identical with a "women's goddess" named Damia.

The Winter festival is known primarily through Cicero's account, supplemented by later Roman authors. First, the house was ritually cleansed of all male persons and presences, even male animals and male portraiture. Then the magistrate's wife and her assistants made bowers of vine-leaves, and decorated the house's banqueting hall with "all manner of growing and blooming plants" except for myrtle, whose presence and naming were expressly forbidden. A banquet table was prepared, with a couch (pulvinar) for the goddess and the image of a snake. The Vestals brought Bona Dea's cult image from her temple and laid it upon her couch, as an honored guest. The goddess' meal was prepared: the entrails (exta) of a sow, sacrificed to her on behalf of the Roman people (pro populo Romano), and a libation of sacrificial wine. The festival continued through the night, a women-only banquet with female musicians, fun and games (ludere), and wine; the last was euphemistically referred to as "milk", and its container as a "honey jar". The rites sanctified the temporary removal of customary constraints imposed on Roman women of all classes by Roman tradition, and underlined the pure and lawful sexual potency of virgins and matrons in a context that excluded any reference to male persons or creatures, male lust or seduction,. According to Cicero, any man who caught even a glimpse of the rites could be punished by blinding. Later Roman writers assume that apart from their different dates and locations, Bona Dea's December and May 1 festivals were essentially the same.
Posted by A Southern Horror Fan