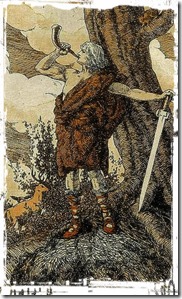 Today is Sigurdsblot, a festival in honor of the legendary hero of Norse mythology Sigurd (Siegfried). He is also the central figure in the Völsunga saga. Sigurd was said to have slain the dragon Fafnir, winning back the treasures of the Rhine.

Sigurd (Siegfried) was the greatest hero in Germanic legend, and central character of the Saga of the Volsungs. He was the foster-son of Regin, who sent him to recover a fabulous hoard of gold. Regin's father Hreidmar had first acquired this treasure, which once belonged to the dwarf Andvari. To get their hands on the gold Regin and his brother Fafnir had then killed Hreidmar, but Fafnir wanted the treasure for himself and turned into a dragon to guard it.

Regin wished to possess the treasure which his brother guarded, and to this end forged a great sword for Sigurd, but it broke the first time it was tested, and Sigurd had his father's sword reassembled and re-forged, and Gram stood every test. By cunningly stabbing the monster from underneath, Sigurd succeeded in slaying Fafnir, thus gaining both wealth and wisdom (by licking the blood of the slain dragon), since Fafnir was said to have understood the language of birds. When he realized that Regin intended to kill him for the gold, Sigurd slew him before carrying it away himself.

Sigurd then went to free the Valkyrie maiden Brunhilde, who lay in a magical sleep, cast there by Odin, for daring to rise above his wishes. But Brunhilde had sworn only to marry the man who could ride through the fire that surrounded her dwelling. Gunnar wanted her, but could not perform the feat, but Sigurd in Gunnar's shape did so. Thus Brunhilde agreed to marry Gunnar. 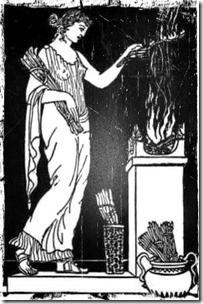 Vestalia is the ancient Roman festival to Vesta-the virgin goddess of family, hearth and home. The festival actually begins on the 7th of June and last until the 15th. On the first day of the festivities it was the only time women were allowed to make sacrificial offerings at the sanctum within Vesta’s temple. The importance of Vesta to Roman religion is indicated by the prominence of the priesthood devoted to her, the Vestal Virgins, Rome's only college of full-time priests.

It was in the house and home that Vesta was most important because she was the goddess of the hearth and of fire. Vesta is particularly important to women of the household as the hearth was the place where food was prepared and next to it the meal was eaten with offerings being thrown into the fire to seek the future from the way it burned. The degree of the importance of Vesta and the hearth in Roman times carries on into modern English, where the word focus (Latin for hearth) continues to be used in a variety of ways, both scientifically and metaphorically, that although differing from the original meaning, still carry a sense of focusing or concentration on something of importance.