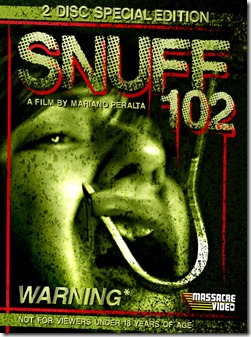 Massacre Video posted on their site that they would be releasing Argentinian director Mariano Peralta’s controversial film “Snuff 102”.

The two DVD set will boast a plethora of special features that underground film aficionados will sure appreciate! DVD/VHS and Hardbox editions will be available for this title!

First on sale will be the VHS edition(street date: 6/19/13), the VHS will be limited to 100 copies and will come on a clean white VHS tape!

The standard DVD for “Snuff 102″ will be ready at the end of June and will begin to ship early July! The DVD will be on sale at the “Days of the Dead” convention in Indianapolis, IN on 7/5-7/8! Hardbox edition will be limited to 66 copies, due to a mix up at the printer the “Snuff 102″ and “Savage Vengeance” hardboxes will be available at the same time, should be a few week wait after the DVD is out.

Synopsis:
When a young journalist decides to investigate the macabre world of “snuff films”, the worst of destinations awaits her as she becomes the next on camera victim. Gagged, beaten and terrified; she will do anything to survive!